Yayın Tarihi : 24/04/2021
The last century has witnessed significant turning points and struggles in history. World wars, collapse of empires, changing borders and developing social patterns have been the milestones up to our present day. Ethnic groups living in peace under the reign of the Ottoman Empire have struggled against the difficulties of the era as a whole. Incidents happened in Çanakkale, Caucasia, Hejaz, Palestine and Iraq were beyond words and tens of thousands of people lost their lives.

People on this land, regardless of their history, ethnicity, religion have always lived in peace and shared both happiness and grief. However, it is so unfortunate that the griefs of the past are now used for political interests. Following the historical mistake of U.S. House of Representatives in 2019, the statement made today  is considered as a manifestation of the political and ideological viewpoint. Our President’s call for opening of the archieves and scientific approach is the best way to reveal the truths in the most transparent and honest way.

With these thoughts, we release our condemnation of the decisions and explanations which are reflections of wrong estimations and declare it null and void. 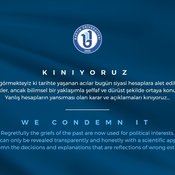 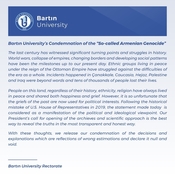