Bartın University Made a Significant Progress in The URAP World Ranking

Yayın Tarihi : 10/01/2022
While Bartın University took place 57 steps up in the URAP 2021-22 World Ranking made under the METU Informatics Institute, it became one of the 112 higher education institutions from Turkey and left 30 universities behind.

METU University Ranking by Academic Performance (URAP) 2021-22 World Ranking has been announced. In the URAP ranking, which is based on scientific productivity and the quality of academic products, three thousand universities worldwide took place. Universities were ranked according to the number of articles they produced in 2019 and their performance in the citations fields, the total number of scientific documents, total publication impact, total citation impact and international cooperation with a 5-year evaluation backwards from 2019. 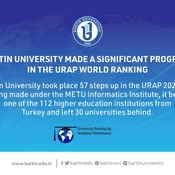